We woke up very earlier and ate breakfast, then drove to the snorkeling place. We suited up and walked about 40 minutes to get to the entrance of the stream. We started out wearing life jackets and then got to take our jackets off and dive deeper into the river. We saw so much life in the water. So many different fish and plants surrounded us. We barely had to swim because the current of the river slowly moved us forward. The water was so amazingly clear and beautiful. I couldn’t believe what I was seeing. After our snorkel adventure we ate a delicious meal at the snorkeling place. While we waited for other groups to get back, we played cards and sung along to music. After all the groups were done with snorkeling and eating, we headed back to the  hotel in Bonito. We swam in the pool at our hotel and relaxed. Then we began getting ready for the talent show that we hosted at our hotel. All the different cultures did a dance or song from their country. We also celebrated Sigrid’s birthday this night. The staff brought out a cake and we sang happy birthday in all of our different languages. It was such a fun night and we got to dance the night away with our new lifetime friends!

We started at the hotel and we eat breakfast, then we went to Estancia Mimosa and takes one hour to get there, then we went hiking between waterfalls and also swam in them. Then we went to Proyet Jiboia and we'll had the change to hold a shake. We also see anothers types of snakes and we learned about them.
Finally, we had a free diner so we could eat whatever we wanted in the downtown and already we could stay in the park and saw the shops.

The day starting out like any other, but there were a few things out of place. We
dressed and showered with the knowledge of our impending departure from our fabulous Pantanal hotel looming over us. That was soon replaced with some ‘other’ emotions when we realized that it was raining outside. This was no light sprinkle either. This was a thunderstorm soaking through towels and shoes left out to dry. All
would have been fine and well if we were just going to hop on the bus and leave, but we had no such luck; our last activity in Pantanal was a nice long track through the bush. We realized what we were in for when we reached the treeline to see that the trail had been flooded under a foot of water. Personally, I thought that was the point where we would turn back, but our guide trudged straight through the water without a second thought. Our journey grew even more pelerious when a certain flying black-and-yellow insect happened upon us. Soon the bees were everywhere,
attracted by our loud voices and music. They got in your hair, under your clothes,
anywhere they could find. It was mere seconds before the group had bolted to
escape. We immidiatley started back for our hotel but not before the bees had gotten their work done. Eventually we got back to be greeted with smiles by our marvelous guide Stanley, who stayed back with a sick exchanger, pointing a camera in our faces to capture the look of defeat by wilderness. We all got back safely, some unscathed, some with stings that lasted for hours, but altogether fine and ready for another bus ride consisting of napping and card games. After that bus ride and a stop at on route restaurant and tourist shop we arrived in Bonito finding
ourselves in a nice hotel in the city with cosy rooms and nice accommodations. We capped off that hectic day with an exchange of pins and signing of flags after an extravagant pizza dinner. Truly an interesting end to the Pantanal portion of our adventure.

Greta Mirizzi from Italy with love

After our first night here in pantanal we exchange students woke up on our new beds. We got ready for our daily activity and ate breakfast at 7h. After that we split up in three groups to go on our 8h activity. One group went to a road trip and another one went horseback riding. My group went on a small safari trip. One man, who lives near our hotel went to guide us through the forest of Pantanal. He explained everything about the plants and animals living here (besides the tons of mosquitoes, trying to eat us). We spottet a lot of exotically plants and birds and we also saw some food prints of a huge alligator. But I think the best about the safari activity was going to the location by the truck. We sat in the back, watching everything we passed and being shaken because of all the potholes. We felt like in a rollercoaster!
Then we ate lunch and cooled in the pool.
Later at 3h the three groups changed the activities so one group went to the boat trip, one rode the horses and we went fishing for piranhas. Some of us caught a lot of fishes, some didn’t. I catches one piranha but I lost it to one of the alligators, wich were coming closer to us every time we caught one more fish.
For dinner we ate the piranhas we caught.
It was a great day although the mosquitos were giving their best to drink every drop of blood in our bodies! 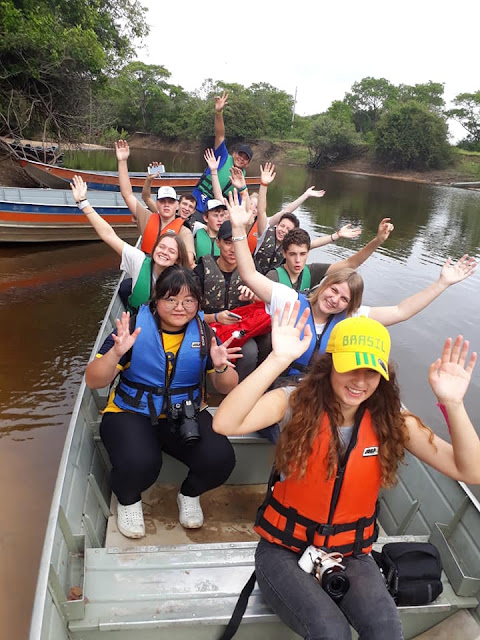 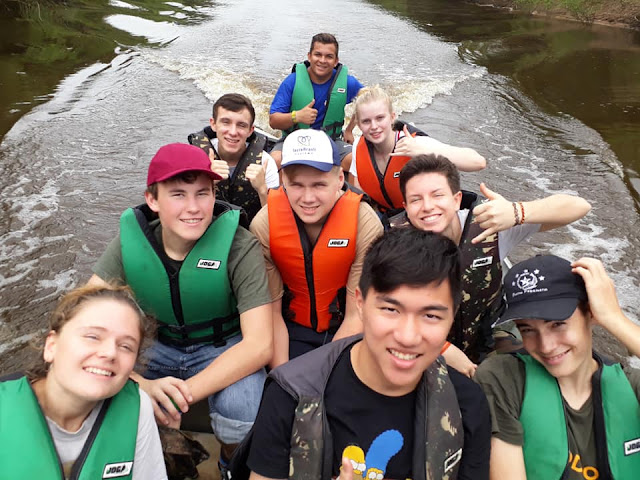 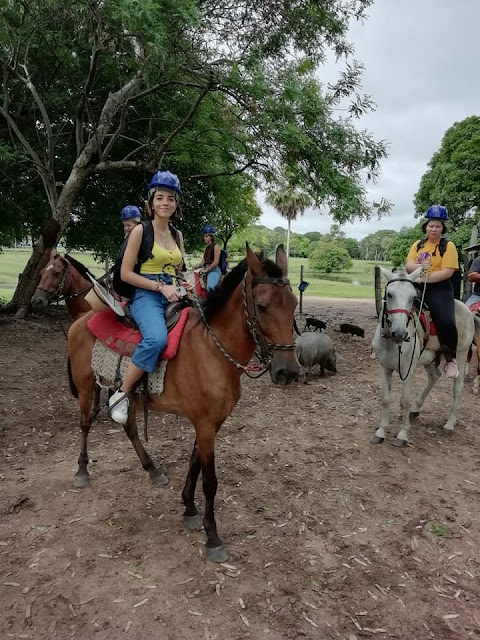 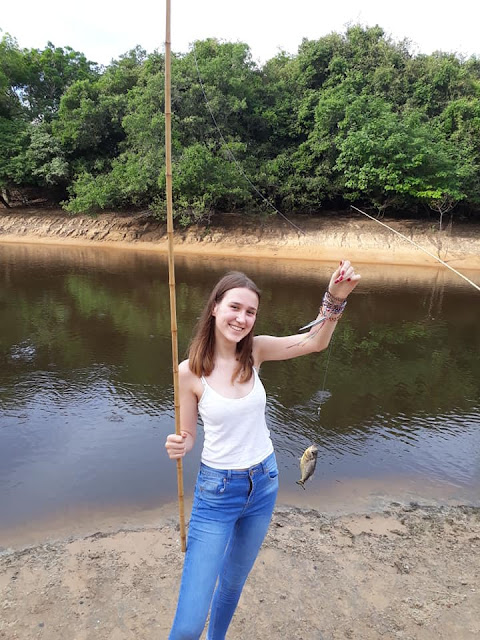 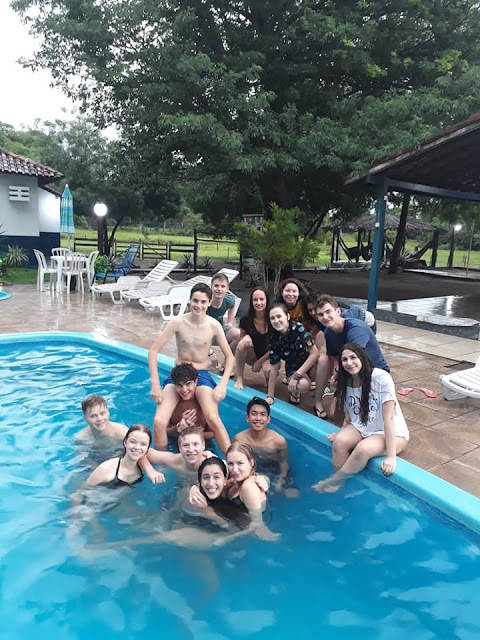 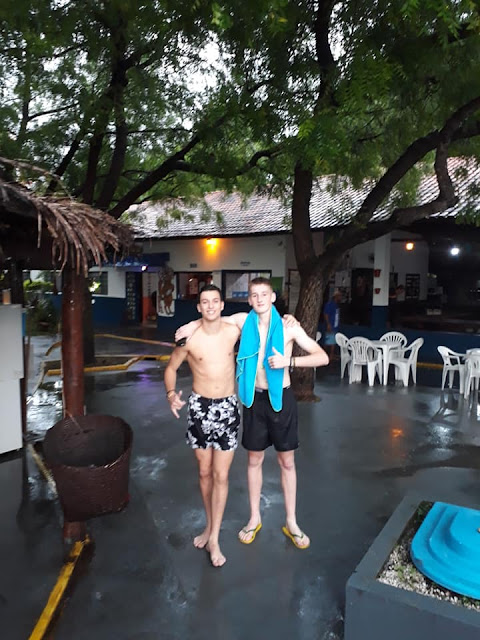 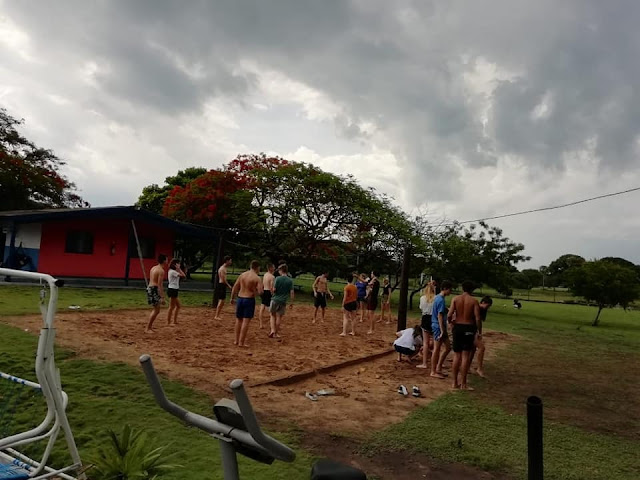 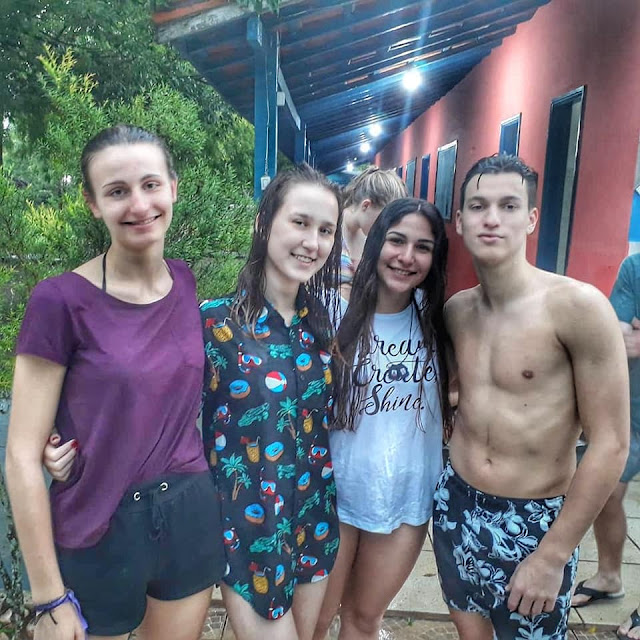